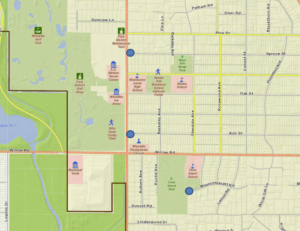 In case you missed it — you might well have, since there were only two people in the audience! — The Winnetka Village Council approved the purchase of two temporary stormwater pumps at their September 6 meeting.  The Village previously had one pump of this type.

Village engineers have been trying to identify ways water can be pumped out of storm sewers to short-term detention areas or even dryer street surfaces in an effort to keep overall water levels down and minimize impassable streets and water flowing into homes.

The authorized pumps would likely be used in three long-term problem areas (Spruce St., Ash St., and Mount Pleasant), though they could potentially be used elsewhere.

The Village tested using their existing portable pump at the end of Mt. Pleasant during a storm on the morning of August 18th, pumping water out that sewer system into the grassy open areas of Crow Island park. This appeared to have had a positive effect in and around Mt. Pleasant, and according to village sources the grass there seems to have done fine with the extra watering.

I love the idea of multiple mobile pumps that can be deployed where needed.  I don’t think this is what is currently envisioned, but having spent a lot of time around the tree streets, I know pumping water progressively down the tree streets, and then from one side of Hibbard to the other would make a big difference for those areas.

I’m pleased that the council seems to be beginning to think more creatively about our flooding problem, and I agree with Councilman Andy Cripe (the originator of this plan) who says, “In my mind this helps validate the importance of not just thinking about speeding the water to a final destination or just a few defined detention areas — we need to look for easy opportunities that would allow the water to safely linger along the way.  It can all add up!”

Here’s the full transcript of the discussion (begins about 2:20 [two hours] into that meeting, if you want to watch the video):

Rob Bahan: One of the action steps identified by the council was obtaining at least two pumps to be used in emergency response, and I’d like to remind the council we already have one pump in hand, and that pump has been shuttled back and forth between the Winnetka Ave. pump station and the Ash Street pump station.

And we found GSA pricing for the same size pumps and that would allow us to deploy three pumps in the locations that Steve had indicated – Ash St., Spruce, and the Mt. Pleasant pump station.   So those are in front of you.  The cost of each of those is approximately $3,600 / each pump.

Scott Myers: Are those locations firm?  Like committed?  Or do we have flexibility?

Bahan: We have flexibility, but as Steve noted in his report (2:20:55), there are a couple of conditions that have to be satisfied in the location.  There has to be sufficient [depth] so water can be delivered to a pump.  The idea here…  for example at the Mount Pleasant pump station, the idea is to actually put the pump into that sewer, and supplement the pump at that location and pump it over land.  So that way you have a continual supply of water so that the pump doesn’t go dry.

And the same thing would go at Ash St. and Spruce.  So you would be [creating?] capacity in the existing storm sewer and pumping it over ground so it frees up more of the system.  So that’s the rationale.  I think there are probably a couple of other locations, but those are the three that were identified which would have the biggest benefit based on Steve’s analysis.

Myers: I was just thinking of the Fuller Lane comment.

Bahan: We would have to look and see where it would go.

Gene Greable: We’d have to analyze

Bahan: They are portable pumps.

Bahan: Well, one thing I would say is based on the discussions I’ve been a part of so far every pump requires at least one or two people at least to get set up.  So you start getting more pumps than you have people.  And that takes us away from other capabilities of emergency response.  I would say the three right now certainly gets us in the right direction and I will ask Steve to evaluate if we need any more, but at this point I would have to say probably not.

Lamphier: That’s good.  I’m all in favor of adding what we can use, rather than jumping in and getting all sorts of inventory that would not be appropriate.

Bahan: There is one other option for pumps.  The Cook County Department of Homeland Security has surplus equipment that is available and when we got through the first flood this summer there was I think you recall the second big rainstorm that was coming our way.  We contacted them and they have additional pumps that were actually brought to our site in the event that we needed them.  That storm tracked south of us and didn’t hit us so we didn’t need them, but we do have the ability to get them on short-term notice without having to purchase any more.  But I think this would round out our inventory for those three known locations where there would be direct benefit.

Greable: So, are we going to re-evaluate this every so often.

Bahan: I think so, …    bringing back the early phasing options   can be implemented in a short period of time, we’d like to be able to reduce reliance on portable pumps because it’s…

Greable: And how many portable pumps have we had in Winnetka?

Bahan: To my knowledge, we had the one.  The one which has been shuttled back and forth between the Winnetka Pump Station and the Ash St. Pump Station.

Chris Rintz: So we just increased our capacity by 200% on temporary pumps.   And I do want to recognize that Trustee Cripe was the one who came up with the original idea.  And this is the sort of thinking that I think is going to be necessary to get us from point A to point B as we start to look at intermediate ways to resolve some of these flooding problems.  So Andy, I appreciate the thoughtful suggestion, and I’m glad you could bring it to the table.

Bahan: And we were looking for the opportunity, and this was the fastest we could find it without bidding it ourselves.  Being able to take care of this priceing avoids the bidding process.

Greable: So there must be other opportunities like this that we could address, maybe

Kristin Ziv: [Inaudible, essentially asking whether we’re jumping the gun buying these pumps before getting back the results of the survey]

Bahan: Here’s what I would say with respect to these three… These three locations are absolutely known problem areas.  The flood survey isn’t… those results are not going to change what we know to be the case either through the Strand modeling or the direct observations of staff or everyone who live here.  Being out in the field during those storms in each of these locations, [   ] are exactly where these pumps need to go.

Greable: Ok.  Any comments or questions from the audience?  Further discussion from the council?  May I have a motion to adopt resolution # R462016.