Meteorology researchers have found that the temperature in cities and suburbs can be up to 10° F warmer on average than surrounding rural areas, and as much as 22° F warmer on summer evenings.  Meteorologists call these hot areas “urban heat islands.”

Materials which absorb and store the heat of daytime sunlight – like impervious rooftops, asphalt and concrete, which are common in communities like Winnetka – are the biggest urban heat culprits.  When exposed to hours of sunshine, they become 50-90° F hotter than the surrounding temperature during the afternoon, and then radiate that heat back into our environment overnight.

The July 23rd storm in Winnetka that deposited about five inches of rain in about five hours may not have been just “bad luck” because the increased heat around cities has an effect on the local weather. Rising hot air and increased evaporation produce clouds that result in nearly 30% more rainfall around urban areas, especially during warmer months.  In combination with warming from other climate change sources, the urban heat island effect increases the chances of extreme localized weather events like the one which flooded Winnetka in July.

The increased heat also leads to significantly higher air conditioning bills and pollution. Instead of opening  windows at night to enjoy natural cooling, we burn fossil fuels so we can get to sleep.

Can we reduce or slow the problem?

Yes. Although it’s not plausible to remove our rooftops, roads and parking lots, many of the best tools for reducing urban heat islands are also healthy ways to absorb and clean stormwater, and otherwise improve our environment. The following solutions could reduce or slow the urban heat island problem: 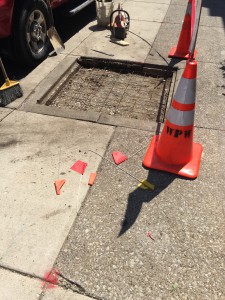 Combining some of these ideas could help us both beautify downtown Winnetka and reduce heat. Currently, our business districts have some trees, but the tree boxes (see photo at right) are unsustainably small and don’t provide enough root space for trees to mature, be healthy or provide much shade.  By replacing confining planters and concrete slab sidewalks with permeable sidewalks and/or streets, our downtown trees could grow into stately elements of an elegant shopping district, while providing cooling summer shade and absorbing more rainwater.

Reply and let us know your ideas to reduce urban heat islands.